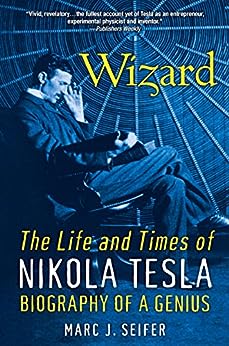 “The story of one of the most prolific, independent, and iconoclastic inventors of this century…fascinating.”—Scientific American

Nikola Tesla (1856-1943), credited as the inspiration for radio, robots, and even radar, has been called the patron saint of modern electricity. Based on original material and previously unavailable documents, this acclaimed book is the definitive biography of the man considered by many to be the founding father of modern electrical technology. Among Tesla’s creations were the channeling of alternating current, fluorescent and neon lighting, wireless telegraphy, and the giant turbines that harnessed the power of Niagara Falls.

This essential biography is illustrated with sixteen pages of photographs, including the July 20, 1931, Time magazine cover for an issue celebrating the inventor’s career.

“A deep and comprehensive biography of a great engineer of early electrical science–likely to become the definitive biography. Highly recommended.”–American Association for the Advancement of Science

“[Wizard] brings the many complex facets of [Tesla's] personal and technical life together in to a cohesive whole….I highly recommend this biography of a great technologist.” –A.A. Mullin, U.S. Army Space and Strategic Defense Command, COMPUTING REVIEWS

“[Along with A Beautiful Mind] one of the five best biographies written on the brilliantly disturbed.”–WALL STREET JOURNAL