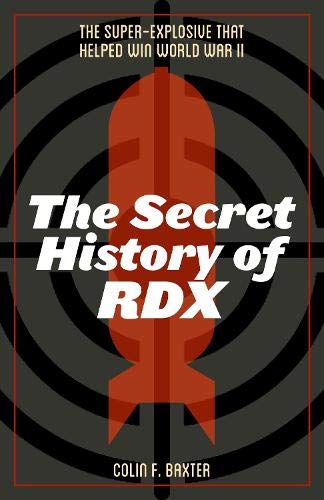 During the early years of World War II, American ships crossing the Atlantic with oil and supplies were virtually defenseless against German U-boats. Bombs and torpedoes fitted with TNT barely made a dent in the tough steel plating that covered the hulls of Axis submarines and ships. Then, seemingly overnight, a top-secret, $100 million plant appeared near Kingsport, Tennessee, manufacturing a sugar-white substance called Research Department Explosive (code name RDX). Behind thirty-eight miles of fencing, thousands of men and women synthesized 23,000 tons of RDX each month. Twice as deadly as TNT and overshadowed only by the atomic bomb, this ordnance proved to be pivotal in the Battle of the Atlantic and directly contributed to the Allied victory in WWII.

In The Secret History of RDX, Colin F. Baxter documents the journey of the super-explosive from conceptualization at Woolwich Arsenal in England to mass production at Holston Ordnance Works in east Tennessee. He examines the debates between RDX advocates and their opponents and explores the use of the explosive in the bomber war over Germany, in the naval war in the Atlantic, and as a key element in the trigger device of the atomic bomb.

Drawing on archival records and interviews with individuals who worked at the Kingsport “powder plant” from 1942 to 1945, Baxter illuminates both the explosive’s military significance and its impact on the lives of ordinary Americans involved in the war industry. Much more than a technical account, this study assesses the social and economic impact of the military-industrial complex on small communities on the home front.