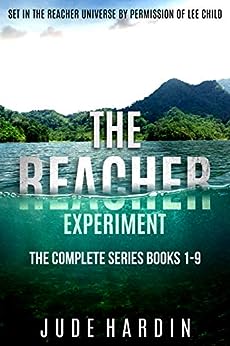 Set in the Reacher Universe by permission of Lee Child

Meet Jack Reacher’s genetic duplicate. And the assassins determined to track him down…

Grew up in an orphanage, recently discovered that he is the product of a human cloning experiment, an exact genetic duplicate of a former army officer named Jack Reacher.

Kill Shot
★★★★★ “I have found that these books are very hard to put down.”
★★★★★ “Another fast-moving thriller by author Jude Hardin that enticed me to read it all in a single sitting.”

Note: While the name Jack Reacher and some of the supporting characters and story situations are used with author Lee Child’s permission, the Jack Reacher character remains offstage in The Reacher Experiment thrillers.

Note: Although published at a later date, the events in COLT and LADY 52 precede those in Jude Hardin’s debut thriller POCKET-47. All of the books listed work as stand-alone thrillers, depending on reader preference. Nicholas Colt also appears in several short stories, including the one titled RACKED.