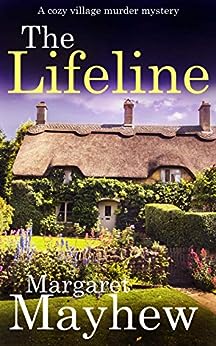 A BEAUTIFULLY WRITTEN COZY VILLAGE MYSTERY FROM A BESTSELLING AUTHOR

Major Cuthbertson stumbles across a body among the fragrant tomato plants. A bloody spade lies next to the face-down victim.

Ruth Harvey has taken over the manor in Frog End, where she runs a successful plant-selling business and provides gardening therapy for some of her husband Dr Tom Harvey’s troubled patients. They include embittered Lawrence Deacon, lonely Joyce Reed, widowed Tanya Carberry and wheelchair-bound Johnny Turner, the young victim of a horrific motorbike crash.

Now murder threatens to destroy everything. Can the Colonel solve the crime before anyone else suffers?

WHAT READERS ARE SAYING ABOUT THE VILLAGE MYSTERIES

“A wonderfully written cozy of the highest caliber.” Ann

“A murder mystery you can read before bedtime!” Carol

“The Colonel, Naomi, and Thursday have stolen my heart.” H. G. Williams

THE DETECTIVE
At the grand old age of 55, the Colonel had been put out to grass by the British Army. In the same year, his beloved wife, Laura, died after a long illness. He found himself facing a bleak and lonely future. There were the children, of course, but they were grown up and had busy lives of their own.

One summer, years before, he and Laura spent their leave in England, touring the West Country. They stopped at a village in Dorset called Frog End which had a spit-and-sawdust pub called the Dog and Duck. Laura had fallen in love with a stone cottage seen across the village green. She had admired the thatched roof and the pink roses round the door. Years later, after her death, the Colonel had revisited the same village alone and seen Laura’s dream cottage had aged badly and that it was up for sale. Against his better judgement, he bought it.

THE SETTING
The cottage was called Pond Cottage and the Colonel soon discovered that he had made a big mistake. The two-hundred-year-old building had deathwatch beetle, rising damp, a falling roof, rot and decay throughout. There was no heating and the wiring was a dangerous disgrace. Logs for an open fire were kept in a tin bath in the scullery and the nettle-infested lavatory was housed outside in a jungle. There was no sign of any pond. But there were compensations: a view over the beautiful village green, clusters of other stone cottages, a Norman church built on Saxon foundations, a graveyard of ancient tombs leaning at perilous angles. And, of course, the Dog and Duck.