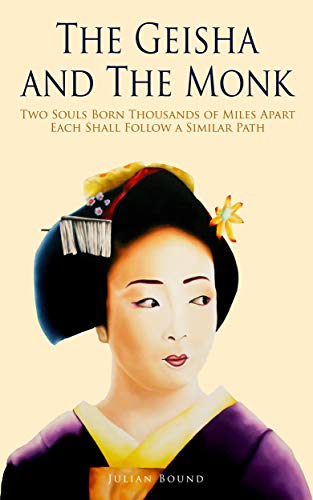 THE GEISHA AND THE MONK a Novel by JULIAN BOUND

‘Two souls born thousands of miles apart, together each shall walk a similar path.’

A girl is born, her life path to become the famed geisha she is destined to be.

A boy is born, ordained to be the revered Lama he is recognised as.

At the dawning of a new century, fate brings them together, a lifetime away from all they have ever known.

‘The Geisha and The Monk’ tells the life stories of Momoko a Tokyo geisha, and Tenzin a Tibetan Buddhist monk, who although coming from different backgrounds share a parallel destiny, a destiny each discover when they eventually meet on the shores of San Francisco’s harbour front.

‘Eventually, two souls destined to meet shall do so, their connection instantly recognised within the eyes of the other.’

From Julian Bound author of ‘Subway of Light’ and ‘Life’s Heart Eternal’.

Born in the UK, Julian is a documentary photographer, film maker and author. Featured on the BBC news, National Geographic and in the international press, his work focuses on the social documentary of world culture, religion and traditions, spending time studying meditation with the Buddhist monks of Tibet and Northern Thailand and with spiritual teachers of India’s Himalaya region.