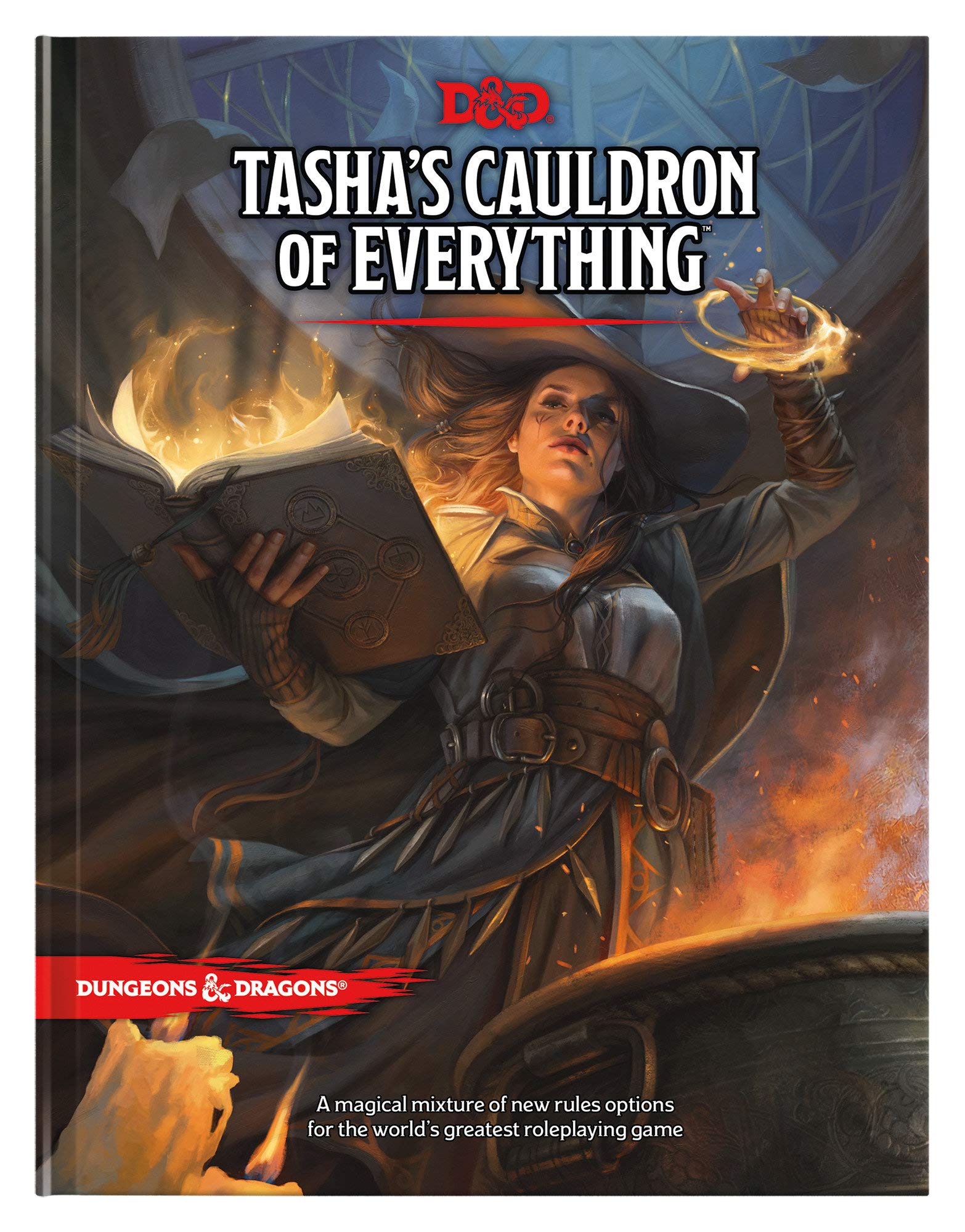 A magical mixture of rules options for the world’s greatest roleplaying game.

The wizard Tasha, whose great works include the spell Tasha’s hideous laughter, has gathered bits and bobs of precious lore during her illustrious career as an adventurer. Her enemies wouldn’t want these treasured secrets scattered across the multiverse, so in defiance, she has collected and codified these tidbits for the enrichment of all.

EXPANDED SUBCLASSES. Try out subclass options for every Dungeons & Dragons class, including the artificer, which appears in the book.

MORE CHARACTER OPTIONS. Tasha’s Cauldron of Everything introduces a host of class features and feats, plus straightforward rules for modifying a character’s racial traits and customizing their origin.

INTRODUCING GROUP PATRONS. Whether you’re part of the same criminal syndicate or working for an ancient dragon, each group patron option comes with its own perks and types of assignments.

SPELLS, ARTIFACTS & MAGIC TATTOOS. Discover more spells, as well as magic tattoos, artifacts, and other magic items for your campaign.

A PLETHORA OF PUZZLES. Ready to be dropped into any D&D adventure, puzzles of varied difficulty await your adventurers, complete with traps and guidance on using the puzzles in a campaign.

Full of expanded content for players and Dungeon Masters alike, this book is a great addition to the Player’s Handbook. Baked in you’ll find more rule options for all the character classes in the Player’s Handbook, including more subclass options. Thrown in for good measure is the artificer class, a master of magical invention. And this witch’s brew wouldn’t be complete without a dash of added artifacts, spellbook options, spells for both player characters and monsters, magical tattoos, group patrons, and other tasty goodies.

What Wonderful Witchery is This?

Tasha has never been shy about sharing her keen insights, and this book is sprinkled with the archmage’s musings on everything from her wizardly rivals to the nature of the multiverse. Herein, she offers a taste of the great power that awaits adventurers everywhere!

Inside Tasha’s Cauldron of Everything

Play a master of magical invention with the Artificer class and explore more subclass options for every class in D&D.

Add to your character’s abilities with more feats and expanded spell lists. And get even more options for customizing your character, including optional rules for modifying racial traits.

Unearth treasures coveted across the planes, learn spells only Tasha would teach you, and discover another kind of magic item: magical tattoos that imbue their bearers with wondrous abilities.

Whether it’s the wrath of the natural world, a perilous dungeon, or a land brimming with magical wonders—get guidance on creating fantastical challenges for any locale.

Add to your toolbox a selection of ready-to-use puzzles, environmental effects, and little-known tricks for sweet-talking a monster out of a fight.

An innovator in providing fantasy entertainment, Dungeons & Dragons is the wellspring for the entire modern game industry, digital as well as tabletop. Fifth edition D&D draws from every prior edition to create a universally compelling play experience, and exemplifies the true spirit of a game that holds captive the hearts and minds of millions of players worldwide. The core rulebook series consists of three books: the Player’s Handbook, the Monster Manual, and the Dungeon Master’s Guide.