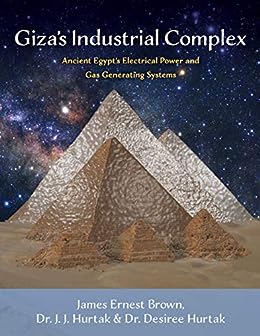 Although pyramids are similar in design, many may have had different or dual functions. The authors propose that ancient Egypt developed and controlled an elaborate power system that was centered around Giza and as far south as Abydos. They believe that the underground structures, channels, and cavities that surround ancient Pyramid structures were part of an immense industrial complex, including gigantic earth batteries.
The authors believe evidence indicates that the Great Pyramid on the Giza Plateau had the ability to electrically charge, or change the molecular structure of water, giving it unique properties. We believe the ancient Egyptians created a fourth form of electrically-charged water, giving it unique properties. James Ernest Brown calls this "Earthmilk Ancient Energy." All pyramids were connected to the Nile River, and there is physical evidence that water from the Nile River circulated through their passageways and chambers by way of man-made channels both above and under the ground.