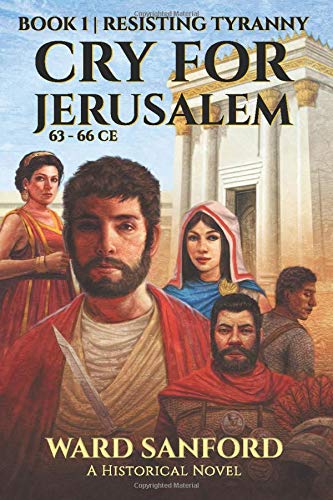 Are you a fan of historical fiction and getting lost in far off worlds of the past? In his debut novel, author Ward Sanford’s Cry For Jerusalem covers the fascinating time period from 63 to 70 CE Jerusalem. This was a period where emperors vied for control of Roman Empire, who’s reach extended to most of the known world at the time. The First Jewish Revolt- or first of the Jewish Roman wars ended with the siege of Jerusalem and the burning of Herod’s temple. This was documented in detail by the Romano-Jewish historian Josephus – who’s works are the chief source next to the Bible for the history of ancient Jerusalem and Palestine. Cry For Jerusalem follows both Josephus’s story and those of others on both side of the conflict that changed this part of the world permanently and shaped civilization at the time.

Was it fate, destiny, or some divine plan that brought four very different travelers together in their struggle to survive what should have been a routine trip to Rome? Driven by events, these new friends and their family members found themselves playing pivotal roles at a focal point in the history of western civilization. For winds that had spread a great fire across Rome also carried embers eastward to Judea, where they threatened to ignite a conflict that would forever change the world for Jews and Christians. In this first of a series of four novels the Jewish rebellion begins in a backdrop of secret tunnels and assassins, where the dreaded Sicarii can strike like lightning and blend back into the crowd just as quickly. Even trained Roman mercenaries are no match for them. In between these historical events—recorded by the historian and eyewitness Josephus—there’s the story of the people involved. You get to meet them in Cry for Jerusalem.

Cry For Jerusalem: Resisting Tyranny – the first in a 4 part book series covering the events leading up to the destruction of the second temple of Jerusalem in 70CE

Amazon Reviews
★★★★★ The characters are so well developed that you feel for them, hope for them; in some cases you hate them, in others you love them!

★★★★★ I really did not know what to expect with this book. But it is a period in history that I find interesting, so I gave it a shot. When I started I thought it might be a dry history book, but it is fascinating.

★★★★★ From the beginning, this book had me. The storyline has everything you might want in a good read. It has intrigue, great plot, perceptive character development, romance, epic themes of good and evil, all woven into a backdrop of history that is brought to life through the characters in this book.

★★★★★ Cry For Jerusalem is a thorough look at the chaotic era leading up to the fall of Jerusalem. Well-researched and described as if the author had personal experience in the time and places. He paints the settings in great detail, making it easy to picture the action.