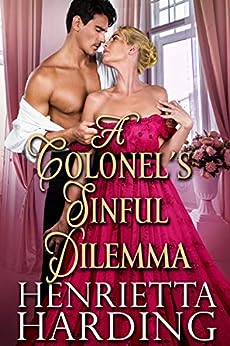 Ever since she was a child, the unconventional Helena Grey has wanted to see the world more than anything. When her beloved brother, Lysander, accepts a position in India, she is more than eager to follow him on this exciting journey. A few years later, Lysander has mended his ways and old gambling habits and is engaged to the beautiful and kind Rose, with the future looking bright for all three of them. However, the last thing Helena expected was that Rose’s brother would be so irresistibly tempting… As soon as she lays eyes on him, her heart is set on a fire that can’t cool down. Will this dazzling Lady surrender to her burning desire and capture the Colonel’s body and spirit?

After learning about his sister’s engagement, Colonel Reginald Wrencrest, takes leave and returns to London for a brief stay. Inclined to approve of Lysander, Reginald is soon undeniably attracted to his eccentric sister. However, Helena’s mysterious affection towards her brother makes Reginald curious and, soon after, leads him to discover Lysander’s rakish past. Appalled, Reginald pressures Rose into breaking this embarrassing engagement, but he gets confronted by the fiery Helena, for his inflexibility and lack of faith in one’s ability to change. His fury at Helena is only worsened by the undeniable attraction he feels for her. Will he manage to tame his growing feelings, or will he succumb to her sinful seduction?

When Lysander disappears, Helena puts all of her hope in Reginald to help her find him. The task is anything but simple though, and before long, Helena finds herself in the midst of the Napoleonic War. With every passionate kiss sparking hotter desire, will Helena and Reginald’s love stand a chance? If only they could find their way through the endless conflicts that divide them and back into each other’s comforting embrace… Could this battle be lost once and for all or will the power of love conquer everything in the end?

"A Colonel’s Sinful Dilemma" is a historical romance novel of approximately 50,000 words. No cheating, no cliffhangers, and a guaranteed happily ever after.